I’m visiting my family in Michigan for a few days between work travel.  After a lunch of saganaki, spanakotiropita, and octopus salad in Greektown, we stopped by the Astoria Pastry Shop.  Greektown pretty much horrified me, as someone who hasn’t been in downtown Detroit for decades, but I’m trying not to be so sad about it.  It was one of the best memories of my high school days, going down to Greektown and the brand spankin’ new Trapper’s Alley for exotic Greek (and Ethiopian, my first!) food.

Now Trapper’s Alley is gone and Greektown is spillover for the first big casino.

We never went downtown while I was growing up.  My great-grandparents were the emigrant generation, and they all moved to the Polonia sections of Detroit once they landed on Ellis Island.  By the time my mom was growing up in the fifties, the family still had enough reason to travel down Woodward to the big department stores and to see relatives.  My mom remembers the city growing more derelict and dangerous over the years, and they finally stopped going.  When I was growing up in the seventies, it was just not a place to go.  We’d occasionally venture out to the Institute of Art or the Symphony or to see a ballet, but it was not a regular part of life.

Only when I discovered food did it become a part of my life again. 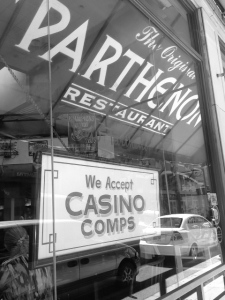 And now, with the casinos, as more middle-class suburban (read: white) people are returning to Detroit as a tourist destination to be drained of their income, Greektown is pretty much history.  There’s still an air of terror that surrounds the place, the fear that a white person will be immediately attacked once entering the city, but still they come.  And that’s a change. Some of the old restaurants and bakeries are there, and some even accept casino comps at cash value.  It’s like any gold rush town — new chain restaurants are moving in, and the place operates as if the casino has formed a parallel economy with its own transportation byways, currency, and value system that feels vaguely outside the law and yet firmly, urgently, within it. 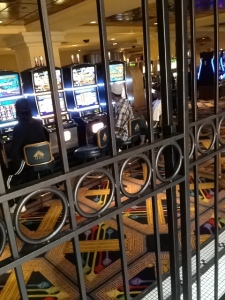 Needless to say, there are many problems with this gold rush mentality, and I can’t argue the casinos haven’t raised millions of dollars for the site of one of the worst urban stories in the twentieth century. But it still makes me sad.  My mom is sad when she thinks of the deterioration of a city that was vibrant in her youth.  I’m sad about the holocaust and post-apocalyptic dystopia the city became and continues to become in my waning youth.  Detroit is more disturbing to me now than it ever was.

Yes, it’s mesmerizing and brutally raw, fascinating to see.  The decay screams out at you to become art — every single block is a photograph, every single conversation is a poem.  The waiter at our restaurant, an imposing dark man, said he’d lived downtown since the seventies.  “I can’t imagine living anywhere else,” he confessed.  “Of course, I have a CCW, but who doesn’t?  I have to keep an eye on my Harley.  Stay safe, ladies.”

Recording these impressions is almost impossible to resist.  But I think we (I) should try very very hard to press back against the impulses that find terrible beauty and remember the cost to humanity.  Not humanity in the big H Humanities sense, but humanity in the sense of people.  An old woman should have some better pleasure in life than being helped from her wheelchair to a slot machine in a toxic environment.  The city shouldn’t be primarily integrated in a holding cell.  Vending machines — if they should continue to exist — shouldn’t be stocked with cigarettes.  A waiter shouldn’t see packing a concealed weapon as a normal part of his day…

You can still get a darn good meal in Greektown.  My mom had one of the best pieces of spanakotiropita (like spanakopita but with cheese) that I’ve ever tasted. The Astoria Pastry Shop, with its pressed copper ceiling and Greek pastries, was founded in the seventies, but it feels like an old place and worth your tourist dollars, and Greektown is a wonderful place to catch the People Mover around the downtown area for free views of the Detroit River and all the downtown buildings in their crumbling or renovating-renovated splendor.  The Astoria is a filo heaven, but if your proclivities swing cakeward, they’ve got you covered, too.  Click, click below to see some of the real sweetness of Detroit.  Next up: Polish bakery!

Note: Part II of this post can be found at A Tale of Two Detroit Bakeries: Polonia.

4 thoughts on “a tale of two detroit bakeries: greektown”