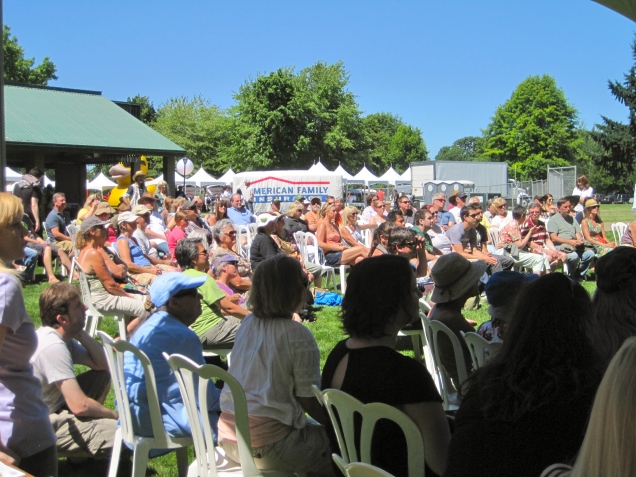 ****BREAKING NEWS**** Nicole Peltz of Field to Table Catering will be subbing for Heidi Tunnell at the Iron Chef Oregon competition today in Portland.  We wish her all the best of luck and Heidi a speedy recovery!

I’ve been thinking about the Iron Chef Eugene competition and what a success it was.  Heidi managed to pull off her win while almost 9 months pregnant, and she had a healthy baby boy a week later (congratulations!).  Even better, this year’s Bite of Eugene raised over $9,000 from our generous title sponsor, American Family Insurance, and the matching donations from our community for Willamette Farm and Food Coalition.  And another $1,000 or so in tips that the festival donated to the Eugene Rotary, whose volunteers helped serve the crowd.

I don’t think I need to say how profoundly your donations will impact WFFC’s efforts to improve sustainability and local food awareness, but I will.  Thank you so much.

The competition didn’t go off without a hitch — we had problems again with the gas line for the stoves.  We called this one The Inferno.  It was less a problem with the stove itself than the hookup, I think.  I wonder if we might solicit a donation of on-site labor for an equipment tech crew from the stove folks next year?  It would be much appreciated and would enable us to stay on schedule.

By the time the day was over, the final competition round dishes were served in a spotlit stage.  This is the final plating just prior to the finish of the competition.

I’ve already mentioned my favorite dish of the competition, Mike Meyer of Red Agave’s interpretation of arroz con pollo that featured caul fat-wrapped, chorizo-stuffed chicken breast and saffron rice with greens (puh-lease add the chorizo to the arroz on the menu at RA!!!! I know it’s a crowd pleaser dish as is, but OMG it was so good and the chorizo gave the whole thing a boost of spice and juiciness).  But there are others that linger for me. I can’t stop thinking about Heidi’s simple pot de crème with a caramelized chicken cracklin’.

Mike’s chicken drumsticks over a warm bourbon slaw, too, was inspirational — literally.  I ended up making a warm Riesling slaw for a party a week later, based on that idea of a boozy warm cabbage. Yum.

Heidi’s chicken under a brick, a traditional Italian preparation, served over fried cauliflower, potatoes, and garnished with roasted lemon, looked homey and delicious and won raves from judges.  A bigger triumph was her ingenuity in shipping it off to her own brick oven at the vendor area of the festival when our ovens stopped working.  Here it is with Mike’s almond cake with chicken liver mousse, a pairing that would have worked a tad better had there not been so much mousse. 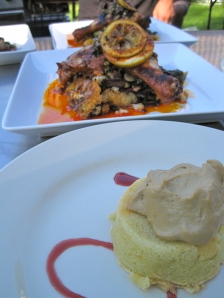 A bit more unusual was Shane Tracey of Nib Modern Eatery’s seared scallop pillowed in a bowl of blackcap raspberry foam (with judge Clive Wanstall, below).  Shane raised the bar in the competition for molecular gastronomical experimentation, to mixed reviews. 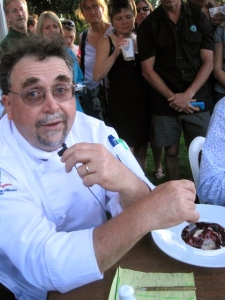 I found the dishes quite easy on the eyes and was happy he was there to showcase some of the latest techniques in making sauces and rather intriguing spongy cakes.  And no matter what the judges said, I was all for the black raspberry swath on the plate. 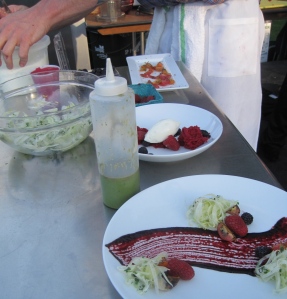 Chef Max Schwartz also held his own in the competition.  He was the most junior member of the competition, a new sous chef at the new Agate Alley Laboratory, which has some eyebrow-raising items on the menu.  He was the only chef to tackle an Asian dish — fermented black beans braised dungeness crabs eaten by Boris, last photo.  I was most pleasantly surprised by the lavender-tinted scallop ceviche that he turned out, replete with a sour curing juice with lime and blackcaps.  No picture, sorry, but these lamb chops with a raspberry sauce and meaty reduction with blue potatoes had panache.

Thanks to all the wonderful chefs and their good humor and willingness to take criticism and perform in front of a live audience in the spirit of sharing good food and raising money for our local foodshed.  I wanted to thank the judges, too, for their honesty and banter.  I’ll admit I was pretty jealous that I didn’t get to hang out and eat with them, but I’m not sure if I could have kept up with the demolition crew.  I’m not sure I’ve ever seen food disappear so quickly.  Plus, if I had been a judge again, I wouldn’t have been able to rock my Chairman Kaga jacket (can you believe that I didn’t arrange for a photo of me biting into the pepper? WTF?).  But still.

If you’d like to see more photos, go here.  If you’d like to read more about the competition, go here for the Register-Guard story or here for a link to the KLCC “Food For Thought” interview with me and Heidi, hosted by judges Boris (top) and Ryan (bottom) (photos, not confirmed orientations). 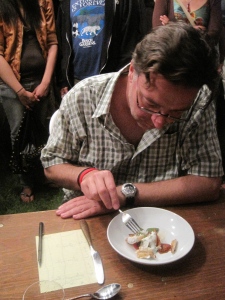 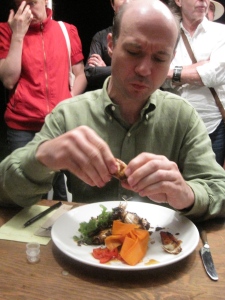 Thanks go most of all to the event organizer, Steve Olivier, who wanted me to emcee and make mah own Iron Chef dream come true.