Lest you think it was all Jewish deli on those fine Balimorean shores, I had to post some of our shellfish eatin’.  I don’t think the word “gorge” is too strong to describe what happened in Baltimore last weekend.  In fact (vegetarians and allergists avert your eyes), it was a downright crustacean demolition derby.

We started off the weekend at G&M Restaurant in Linthicum, the former hole-in-the-wall gone Big City with an expansion and spiffing up in the ten years we’ve been away from it. We’re not so sure we like the spiffing, but they still have crabcakes as big as a salad plate that are made up of lump crabmeat and a binding batter.  No filler.  None.  As in a softball of large chunks of crab with a bit of eggy coating, served simply with lemon.  One is enough, and don’t bother with the anemic sides or stale rolls. 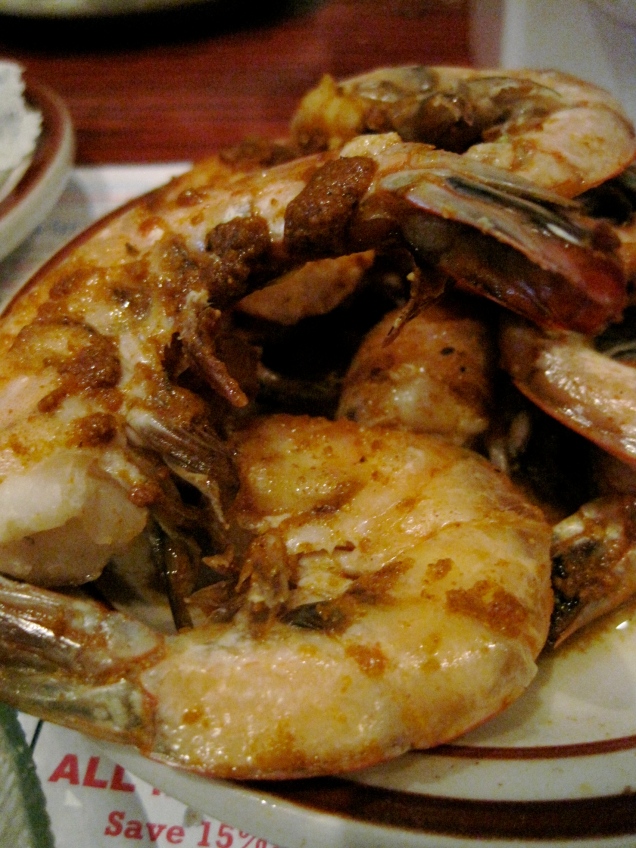 Instead, focus on the seafood.  Why just eat crabcakes, when you can also have Maryland crab soup and a shrimp boil?

We shared a bowl of (rather undistinguished) soup that seemed light on the crab to me, more of a tomato soup with frozen peas, corn, and limas than anything else, slopped over the side of the bowl.  But the shrimp were good — slightly dusted with Old Bay seasoning from the boil, large and delicious.

But clearly, we were holding back for the big event.  For my father-in-law’s 80th birthday party, a gala family event, we ordered the finest crab preparation in the world, Maryland blue crabs steamed with Old Bay.

Soooo good.  See that mud?  It’s not mud. It’s Old Bay.  To eat the crabs, you crack them open and eat the sweet, soft flesh while licking the Old Bay off your fingers.  No need for butter or tartar sauce or anything like that.  It’s just you and the spicy, salty sea.  Even with the questionable origins of the crabs (the Chesapeake has been polluted and the crabs usually come from farther south, and you know what’s going on with southern waters right now), I have to say that blue crabs beat the pants off our western dungeness crabs.  The meat is almost silky, and the large crabs don’t result in the stringy, bland meat that dungeness sometimes do.  And no one in Maryland insists on chilling (!) the crabs like we do here. 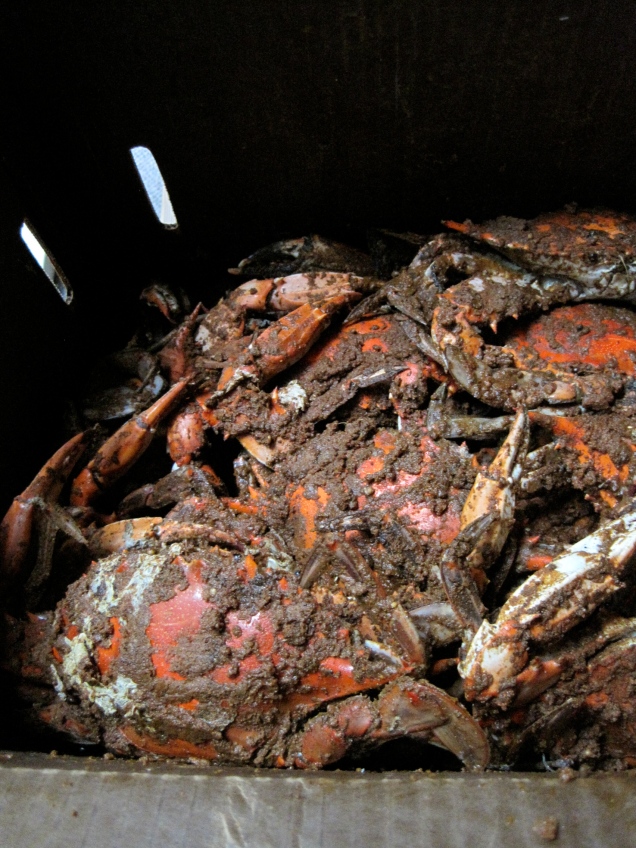 The boys brought home a sampler of coddies, the little seafood cakes that are another specialty of Baltimore, and I sliced up a dozen deli pickles (green, “well-done,” and green tomato).  My sister-in-law made a creamy dilled potato salad that I’m dying to try out for summer barbecues.  It was meant to go with the crabs, but we were so crustacean-drunk we didn’t eat much.  All the better — we could eat it for a couple of days for lunch and snacks.  Once I calibrate the proportions, I’ll post a recipe, but the basic ingredients were potatoes, fresh dill, red onion, cucumber, Greek yogurt and mayonnaise.  Yum.  And as drunk as we were on Old Bay, we topped it all off with springy, fruity rosé wine from California and Oregon (and crummy beer, pictured below).

My contributions to this entire feast were minimal, I’m afraid.  I’ve been so busy that I’m just not able to do much else other than work, and I took the opportunity of our trip to spend a wonderfully exhausting day at the Barnes archive at University of Maryland.  I did bring some hazelnuts and Brooks prunes to represent our ‘hood, and made Linda Ziedrich’s pickled prunes, but other than that, I just served as kitchen help and a shopper, and spent a lot of time on my laptop putting out fires.

But back to the crustaceans.  We had so much fun eating shellfish that we ordered lobsters a couple nights later and did it all again, even though lobster isn’t exactly a Baltimore tradition.  I, for one, was willing to overlook that.  We had them with drawn butter and homemade mayonnaise, and they were fabulous.  My genius sister-in-law made crèpes for dessert, and I really regretted not being able to pack my remaining few jars of 2009 jam.  I didn’t take pictures, because by then I could barely move.