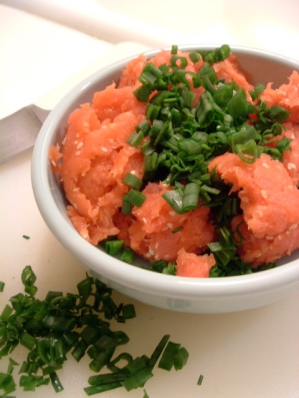 I’ve been a big fan of spicy tuna rolls for many years. They drove me crazy until I figured out the secret ingredient: sriracha hot sauce, the Thai stuff you see on the tables at Vietnamese and Chinese restaurants. Some of the upscale sushi places use the traditional Japanese hot spice mix called togarashi (7-spice powder), but more often than not, the red stuff is sriracha, which is widely available at Asian markets and even some chain grocery stores.

For sushi in Eugene, you really can only profitably eat at Sushi Domo, a neighborhood Japanese restaurant in town that is rather out of the way, unpromisingly tucked into a strip mall between a Wal-Mart and a Goodwill. The sushi, surprisingly, is good, not great, a solid B+ performance. That’s not bad for sushi in Eugene, to say nothing of Eugene restaurants in general. And the menu features something delicious and unusual, what they call a crunchy spicy tuna roll. Usually, I hate the fancy rolls because they are a mishmash of flavors, are either brushed in teriyaki sauce or topped with Japanese mayonnaise, one of the foulest concoctions ever. And I’ve had crunchy rolls elsewhere that were not as good, or, egads, crunchy because they are rolled in batter and deep-fried. But this crunchy roll was delish. The little crunchy bits of tempura batter were integrated into the spicy tuna, tiny and subtle, just adding a bit of texture.

The crucial thing for home sushi is to get the freshest fish possible. It’s best to go to a fishmonger. Don’t assume that all fresh tuna is sushi-grade (or more technically correct, sashimi-grade, since “sushi” refers to the seasoned rice). Also, please don’t put mayonnaise on sushi; some restaurants now skip a step and just glop some srirachi-flavored mayo on top of a tekka-maki or tuna roll. I don’t even like it in the sauce for spicy tuna rolls.

If you need a recipe for sushi rice or how to roll sushi, google is your friend.

Serves: 4 with other sushi or appetizers

Cut tuna into 2-inch cubes for food processor. Add to food processor and pulse until chopped roughly. (The mix in the photo was processed a bit too much so it was paste-like, and that really ruins the texture.) Place fish into bowl and mix with other ingredients. Taste for spiciness and salt. Serve in rolls with avocado and/or cucumber.  Another alternative is to serve without rice: use thinly sliced cucumber wrapped around a bit of spicy tuna mixture, secured by a toothpick.

14 thoughts on “the secret of spicy tuna rolls” 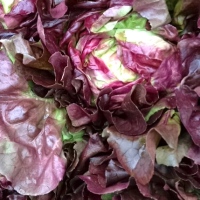